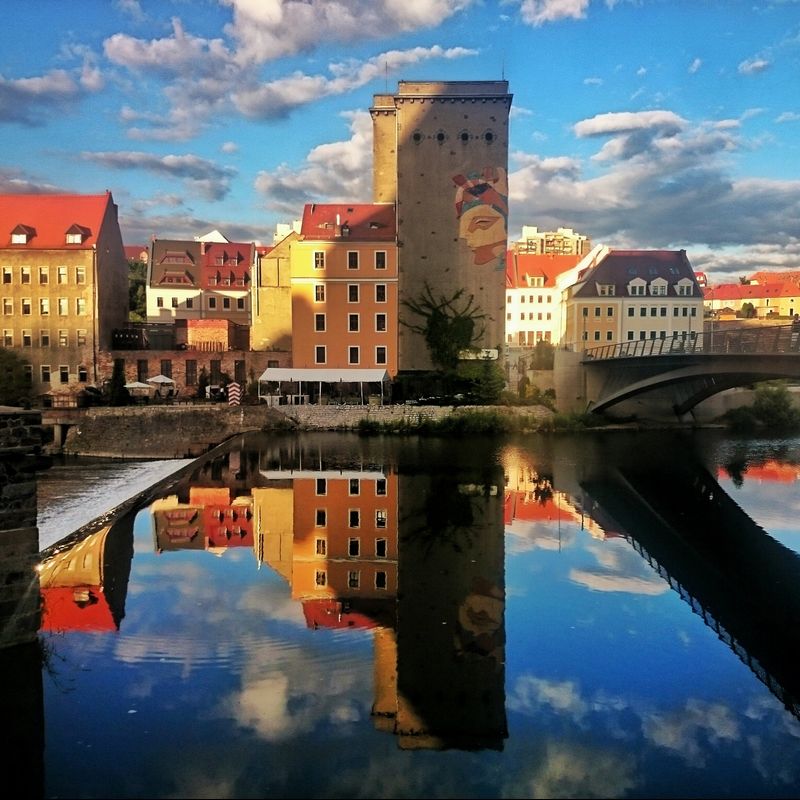 If I had to tell You cities divided by the border of the country I would think about Cieszyn (Polish and Czech) and the Frankfurt on Oder-Słubice set. Zgorzelec and Görlitz, located on the other side of the Nysa Łużycka River, have recently joined the group of interesting border towns.

Both cities differ significantly from each other, and before the war it was Zgorzelec that was part of Görlitz. Let me start with the part on the German side. According to the information about the city, it is one of the few that survived World War II without major damage.

Before what I liked, I will tell you about what surprised me. The first thing was a large number of empty premises and entire buildings. As we found out later, many Germans left “west”. We found a lot of strange shops in the streets, where you could buy practically everything, including the fashion that worked well half a century ago. Lots of shops with Chinese crap, but in larger streets the feeling of the times was returning to normal.

How did Görlitz surprise me? First of all, architecture and urban layout. The town is incredibly charming, and walking along narrow streets it is very easy to imagine what the city looked like in the past. I was also impressed by the Church of St. Peter and Paul. It rises monumentally above the old town. For me, however, it looked more interesting from the back. It was only from the level of the river that the bedrock on which it was built was visible. From this side, the church is even more impressive. An interesting structure is the Frauenturm tower, also known as the Fat Tower. At its foot there are large palms in pots, which fit moderately, but the tower itself is interesting. Strange for me too it turned out that at 6 p.m. shops and cafes mostly closed and everything died a bit. Maybe the reason for that was the middle of the week, or maybe it wasn’t season yet. Next time I will be happy to go some weekend.

As for the Polish part, in my opinion you can see that the center of the old city was on the other side. Zgorzelec is smaller and does not have such an interesting urban layout as Görlitz. I personally liked the restaurant in the tower with a great view of the river and the other bank. The city is situated on hills and also has its own interesting charm.

If you are in the area, take a look at these two (and actually one) cities. They are similar but also different. Personally, I like the German side more, but you can also see a lot of empty premises and entire buildings there.