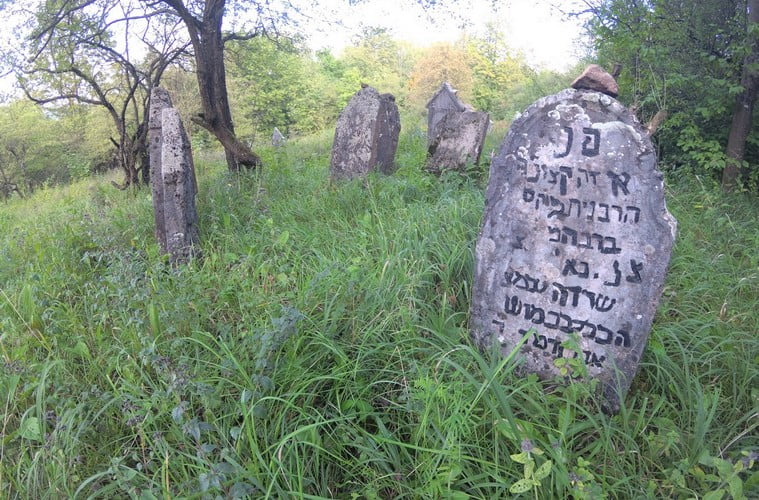 The Jewish community used to be a large part of the inhabitants of the cities and towns in the Świętokrzyskie region. This was also the case in Chęciny, and one of the traces of their lives is the Jewish cemetery located there. The Jewish cemetery in Chęciny is off the beaten track, but it’s definitely worth visiting!

The Jewish cemetery in Chęciny is not in the centre of the town and it is not easy to find it if we do not know where to look. I think that rarely anyone comes here by accident. We can get to its area by going east from the eastern gate of the castle or from ul. Radkowska. The descent from the trail to the cemetery is steep and may not be safe after snow or rain.

The settlement of Jews in Chęciny was difficult at the beginning. In 1581, King Stefan Batory allowed only two Jewish houses. In 1662, Jews obtained the right to lease houses in the town, and thirty years later (Władysław IV), they were granted the privilege to build a brick house of prayer and to pray. It was not until 1777 that all restrictions on Jewish settlement in Chęciny were removed. At the beginning of the 19th century, Jews constituted about 70% of the population of Chęciny, and at the beginning of the next century, this number dropped to about 50% (about 2,800 people).

In mid-1941, a ghetto was established here. It was limited by Łokietka, Długa, Bolechowska, Radkowska and Kielecka Streets. Not only local Jews were confined there, but also those from nearby towns. In 1942, they were deported to extermination camps. In total, over 7,000 people passed through the ghetto.

The Jewish cemetery in Chęciny

The cemetery was most probably established in the mid-seventeenth century. In 1668, Jews were granted the privilege to restore the cemetery, so it must have existed by then. It served not only the Jews of Chęciny, but also Kielce. The tombstones were decorated with reliefs with plant, animal and religious symbols.

The current condition is poor … There is an improvement between what was a dozen years ago and now, but still no revelations. Only a fragment of the cemetery with a part of the matzevot has been cleaned. The others lie in the tall grass in a less well-kept part of the area. The already mentioned descent from the trail to the cemetery is also bad (it’s hard to imagine using it covered with mud or ice).

The cemetery currently covers a plot of over 2 hectares. The boundaries of the necropolises are partially preserved (in some places a fragment of the wall is visible, and in others the embankment). About 200 matzevot have survived in the Jewish cemetery. Probably some of them were taken away from the cemetery and used to build roads or houses. They are mostly made of local conglomerates. Due to the material from which the tombstones were made and the passage of time, it is more and more difficult to read what is written on them. Some matzevot still stand in rows, which proves that this is their original position.

The Jewish cemetery in Chęciny is located practically outside the city and once was a place of parties and drinking alcohol, but something has probably changed, because I have not heard about this problem for a long time. I think that this place should be better described, secured and made available to tourists, especially since the Jewish community in Świętokrzyskie Province, practically non-existent today, once constituted a large percentage of inhabitants of larger and smaller towns.

Chęciny is an interesting city. If you are going there, be sure to visit the Miedzianka and the Science Center in Podzamcze Chęciński or the open-air museum in Tokarnia. The Jewish cemetery in Chęciny is a good start for a trip around the area.