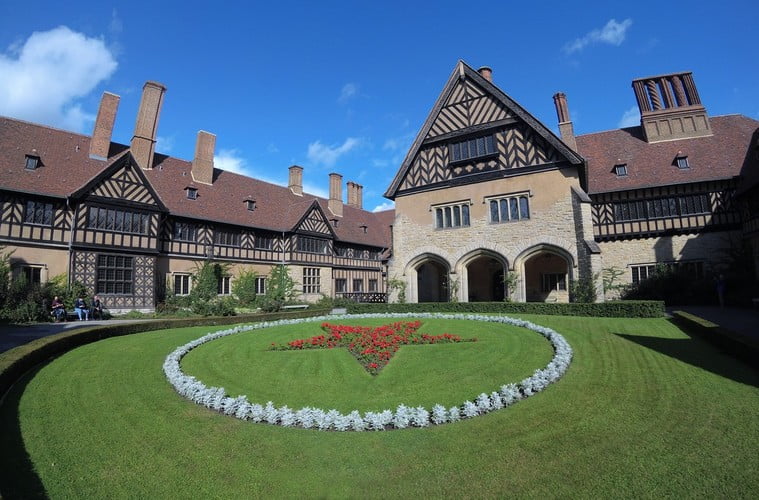 Cecilienhof – here the appearance of the post-war world was defined

There are legends about Potsdam’s palaces. So far, I have only seen them passing through. However, this has changed recently. Among the places visited was the Cecilienhof Palace, which changes the history of Europe!

The Cecilienhof Palace (Schloss Cecilienhof) is located in Potsdam (6 km from the city centre and 37 km from Berlin city centre). It is located on a peninsula and is surrounded by the waters of Lake Jungfernsee and Lake Heiliger. There is a parking lot next to the palace where you can leave your car while visiting.

The construction of the Cecilienhof Palace began in 1913 and its commissioner was Emperor Wilhelm II. The palace was owned by William of Prussia and his wife, Cecylia. The architect of the building was Paul Schultze-Naumburg. It is the last palace built by the Hohenzollerns.

The palace was supposed to be completed by October 1, 1915, but due to a break caused by World War I, Cecilia moved into the residence in August 1917. A month later, she gave birth to Princess Cecilia. October 1 is considered the completion date for the palace.

A year later, the emperor abdicated, and in 1926 the palace was returned to William and Cecilia, who lived there until 1945. In the same year, the Potsdam Conference described below was held. After the war, the palace was owned by the Democratic Women’s Association. In 1960, a hotel was built there, which is still operating today.

Visiting the palace without reservation is possible, but I recommend booking your tickets in advance. It is open from the beginning of April to the end of October – from Tuesday to Sunday from 10.00-17.00 and from November to March – from Tuesday to Sunday from 10.00-16.30. A normal ticket costs 8 euro and reduced ticket 6 euro. If you want to take pictures inside, be prepared to pay an additional few euros. Audioguides (also in Polish) are available on site.

The palace is built in the style of an English country manor house and does not resemble the palaces we know e.g. from Poland. Among the trees, it looks impressive from the outside, but it can be treated more like a large house. The first and visible decorative element is … chimneys. If you don’t normally look at such things, take a look here and you won’t be disappointed!

We can visit the palace interiors and get knowledge about the history of the organization and course of the Potsdam Conference. An interesting princess apartment has been preserved in its original condition. It looks like a ship’s cabin (you can find it in the photo below).

The courtyard is impressive, but also the garden at the back. It was the site of photo sessions during the Potsdam Conference.

The palace was marked in the history of Europe, not with its architecture or interiors (although it is also worth attention), but with the organization of the so-called Potsdam Conference. On July 17 – August 2, 1945, the USSR leader Joseph Stalin, British Prime Minister Winston Churchill (who was replaced in the middle by Clement Attlee) and US President Harry Truman met there. The room where the deliberations took place is preserved in its original condition. Even the flags on the table and walls are from 1945. It was the third of the so-called The Big Three (earlier were held in Tehran and Yalta).

It is worth adding that each of the national delegations had their own rooms at their disposal and a separate entrance to the meeting room to avoid protocol fails (ex. who should enter first).

During the conference, US President Harry Truman gave a telephone order to drop an atomic bomb on Hiroshima.

An interesting fact is that the Cecilienhof Palace was in the zone of Soviet influence. Even before the conference, they had prepared a strong indication of their presence in the courtyard in the form of a flower bed of red flowers that “accidentally” formed a star shape. This flower bed is maintained and still exists today.

If you’ve watched Steven Spielberg’s “Spy Bridge”, the Glienicker Brucke Bridge (on the Havel River) is mentioned there. On this bridge, spies exchanged between the east and the west several times. The first was in 1962, and the last was probably in 1986.

The above-mentioned bridge is not the only trace of the KGB’s activity in Potsdam. Cecilienhof Palace was surrounded by a district inhabited by KGB officers and agents. They had their offices, houses, casino and prison there. Today, most of the houses are converted into luxury homes.

Walk around Leistikowstraße and you will come across signs informing us about the functions of buildings during the DDR era. You will also find a KGB prison memorial center there. The prison is not renovated – it is in its original condition. It was used to detain German and Soviet soldiers. They were tortured, and the survivors most often ended up in Siberia. It operated until 1980.

The city centre of Potsdam and the Sanssouci Palace is definitely worth visiting. An interesting place is also Babelsberg Film Park. While in Potsdam, you can also visit the nearby Brandenburg, where two old towns, rides on the river and many interesting attractions await you.

The Cecilienhof Palace is a very interesting object, and the fact that the Potsdam Conference was held there increases my interest in it. A lot of organizational curiosities about the conference and the world from the times of the Iron Curtain visiting the palace a very good idea!