Many people connect the Czech Republic with cheese, but the fried one, with tartar sauce and French fries. However, there are many more cheeses in this country, and one of the equally popular is hermelin, and more precisely nakládaný hermelin. I invite you to do and try!

If you ask for  Czech cheese in Poland, then the previously mentioned fried cheese will probably be one of the first answers. Another cheese, which is popular in the Czech Republic, is Olomouc curd cheese. Produced in a family-owned factory for many years, it is known for its high protein content, low-fat content and a very intense aroma.  There are more chess in Czech and depending on the region we can try other products.

But let’s get back to the point. Hermelin is a cheese that is produced in the Czech town of Sedlčany. It is a Camembert-type cheese (soft cheese with white mould), but due to the reservation of this name, the local name was introduced. At the beginning it was Hermlin, and later hermelin. This name was reserved in 1946. This cheese in taste and consistency is almost identical to camembert cheese, which we know from our stores. If you do not have an original hermelin, the camembert from the store will also work. Hermelins in the Czech Republic are usually prepared in oil or fried.

This time I will describe how to prepare Nakládaný hermelin. There is a very good snack for beer, and to do it we need:

We start by choosing a jar, to which we can put the cheese without problems, and at the same time, there will not be too much space in it. If we already have such a jar, we start making a paste – we blend garlic and chilli peppers with the addition of smoked pepper. If the consistency is unsuitable (too dry), add oil. Then cut horizontally cheese and spread in the middle of previously prepared paste. We put it back together. At the bottom of the jar, add a layer of onion, then the first cheese. The next layer is onion, and on it the next cheese and the same, up to the top of the jar. The last layer is onion. Sprinkle the whole with spices, and press the bay leaves and peppers on the sides. Pour the oil so that it covers the whole.

Put the jar in a cool place, preferably for a week. If you want the cheeses to soften this, so that you can spread them on the sandwich, you have to wait about two weeks. After seasoning, you can store cheese in the fridge. The oil that stays after eating the contents of the jar can be used in the kitchen – it smells great.

Nakládaný hermelin eats with the addition of marinated onion and chilli. Its taste is intense and garlic, but the beer fits perfectly! 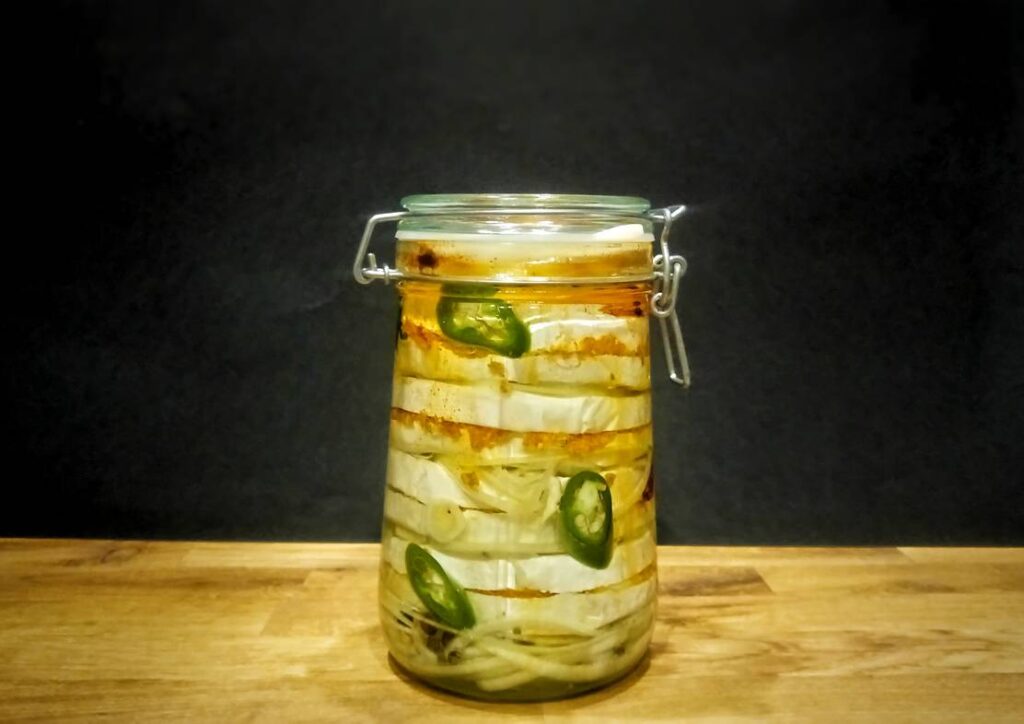