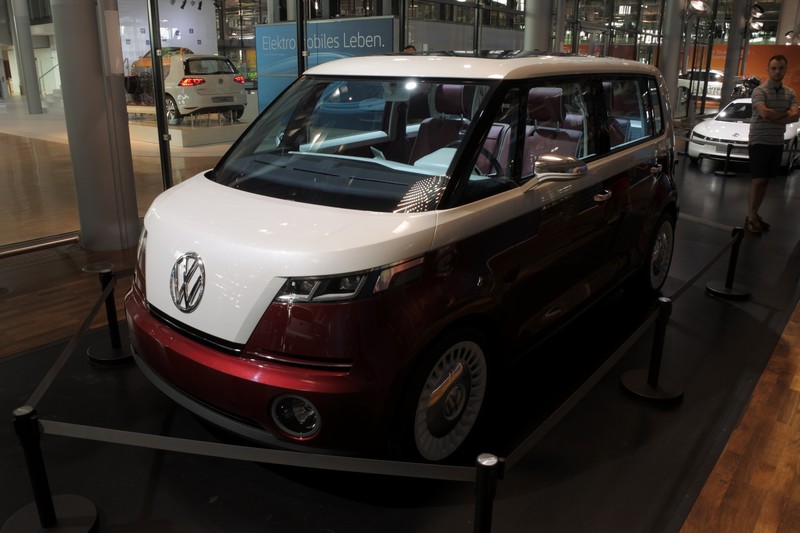 Last time we visited several places related to cars and planes on the route of our trip. The one I will write about today was found at the last minute, but we managed to get a small tour – Volkswagen Transparent factory.

This place is located in Dresden and is called Glassen Manufakturen – Transparent Factory. We did not have Dresden in the accommodation plan, but we wanted to visit it because the city in the pictures made a good impression. While looking for unique and interesting places, apart from the most beautiful dairy shop in the world (which unfortunately was closed on Sundays), I also found the Transparent Factory. According to the plan, we were supposed to visit it after visiting the city centre, and our tour of the Volkswagen world started at 3 p.m.

In order not to be too easy, the day before, in the evening we got a flat tire. The nail in the tire at first glance destroyed the plans, especially since this is a difficult problem in Germany on Sunday. We put on a spare wheel and decided to go to Zgorzelec (about 120 km) and fix the wheel. We found a 24h vulcanization service on the Internet. Unfortunately, for the fact that it was a Sunday, we also paid for it as on Sunday (PLN 150). The temporary spare wheel is so specific that you cannot drive more than 80 km / h on it. It is safe around 70km / h. If you need a lesson of patience, I recommend you to drive the German motorway (without speed limits) at a speed of 70 km / h over a distance of over 120 km.

After the wheel was repaired, we decided not to miss a factory visit. We returned to Dresden on the same route. The only difference is that the route on the access road took us over 2 hours, and the return route – less than one. Unfortunately, due to a long delay, we gave up visiting the old town, but looking at it from the car windows, I know that I must see it on my next trips.

But let’s go back to the factory itself. It is located in the city centre. It is not the main Volkswagen factory, but a relatively small facility in which one of the models was assembled – Phateon. I am writing “was” because in March this year production was finished and the factory is waiting for information about the next model to be assembled there.

We took part in a “tour” conducted in English. It consisted of three stages. We started with a production line that is not like the factories you can imagine from movies or photos. Wooden floors, large windows with natural light and general order gave the impression that we are in some modern home, not a factory. On the line, we saw the individual car assembly stands and the Volkswagen Phateon disassembled into its first parts – believe it was a lot. It was the only zone where photos were not allowed. Then we went to the exhibition on the historic Volkswagen group cars and explored the topic of electric cars.

Interestingly, the first electric Golf was created in the mid-seventies, just like the electric “Cucumber”. In the latter, the batteries weighed almost a ton! Some of the exhibition featured Volkswagen’s prototype electric cars. They make an impression with their appearance but also with their weight. Among them, one model that I would like to see at home. Interestingly, our guide said that they have been ready for production for several years, people like it, but somehow it does not work out. So far, the prototypes only go to the exhibition to the exhibition. The one I liked is supposed to cost around 30,000 euro, and it’s called Bulli … I’m starting to put it down 🙂

If you are going to Dresden, be sure to check it out, because the place is definitely worth it.