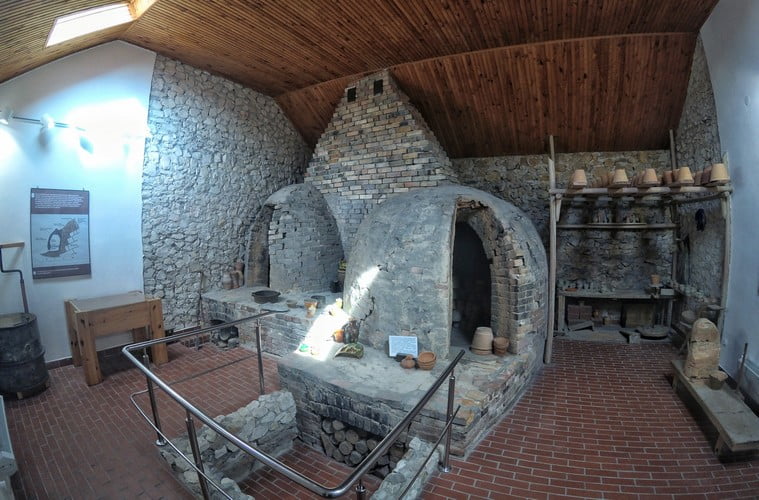 I’ve heard about this place before, but we haven’t managed to reach it yet. Coming back from exploring the region, we decided to change it and visit Pottery Tradition Center in Chałupki – the only place of this type in Poland.

Pottery Tradition Center is located in the village of Chałupki. It is located 5 kilometers from Morawica and less than 20 km from the center of Kielce. At the Center, we have the possibility to park the car free of charge and use the toilet.

There are also practical workshops organized for groups, where participants can create their own pottery works. They can be burned out later.

If you arrive and find no one there, despite the open gate, call the custodian – Mr. Józef Głuszek (no. Above). He lives opposite and he shows visitors around the facility. Mr. Józef is the son of one of the best potter artists of his time. Both father and son bore the same name. Józef senior worked in this place all his life. 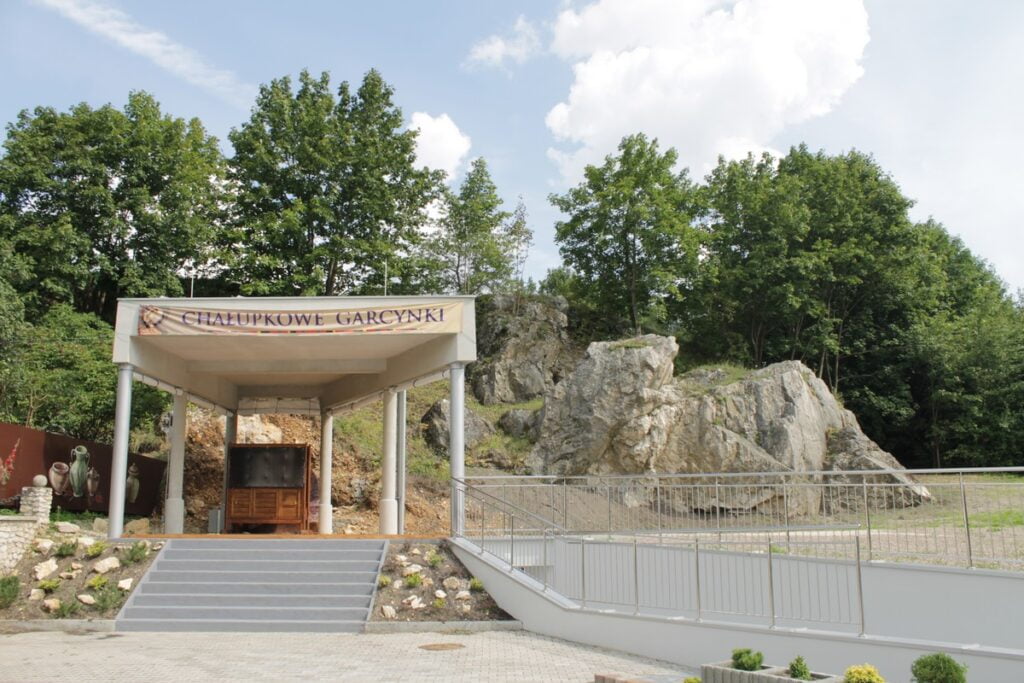 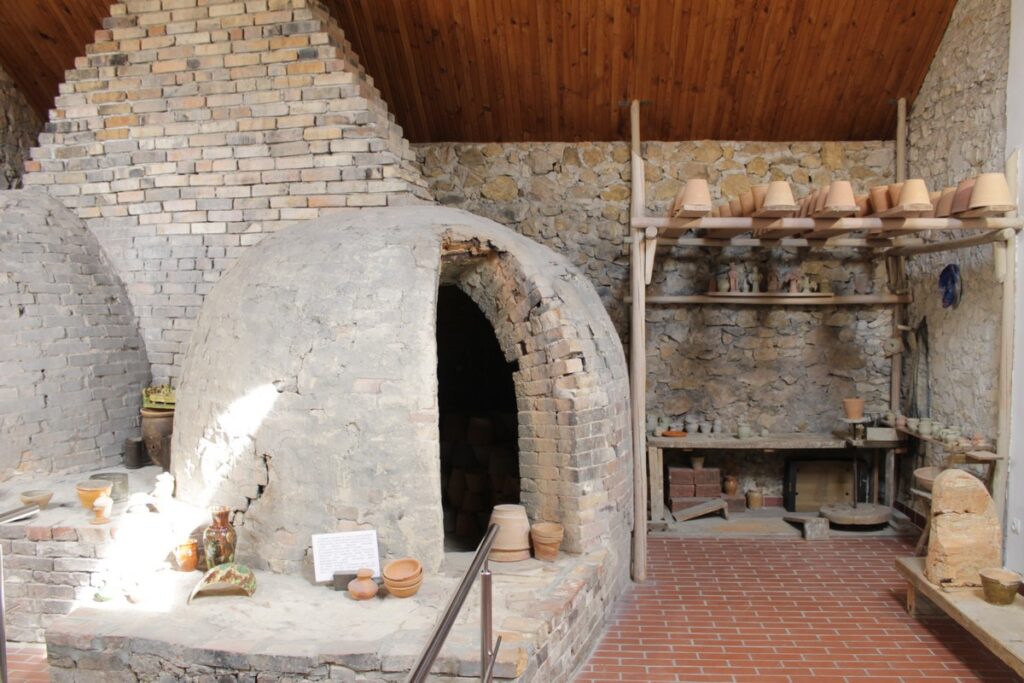 The place where the exhibition is located was once the family home of the Głuszek brothers: Antonina and Józef. They lived here with their two sons – one of them was Mr. Józef, who was showing us around the museum today. The exhibition consists of three rooms. The first one houses the original firing furnace and the former pottery workshop with all the necessary tools. There, we learn about the history of pottery in this area and the methods of obtaining raw materials for production. We learn about the process of making vessels, from clay shaping, through shaping, decorating and firing, to glazing.

In the second part, in the corridor, there are works by children who took part in practical workshops, as well as family photos and various decorations of Józef senior related to his profession.

The third room is actually an exhibition of dishes and figural ceramics. These are the most valuable collections of the Center, made by local potters. The impression is made by both interesting figures of saints and dishes – pots, jugs, plates, pans, pots, double or triple. There is also the most important souvenir and the oldest vessel – a jug made by Antonina and Józef in 1944. 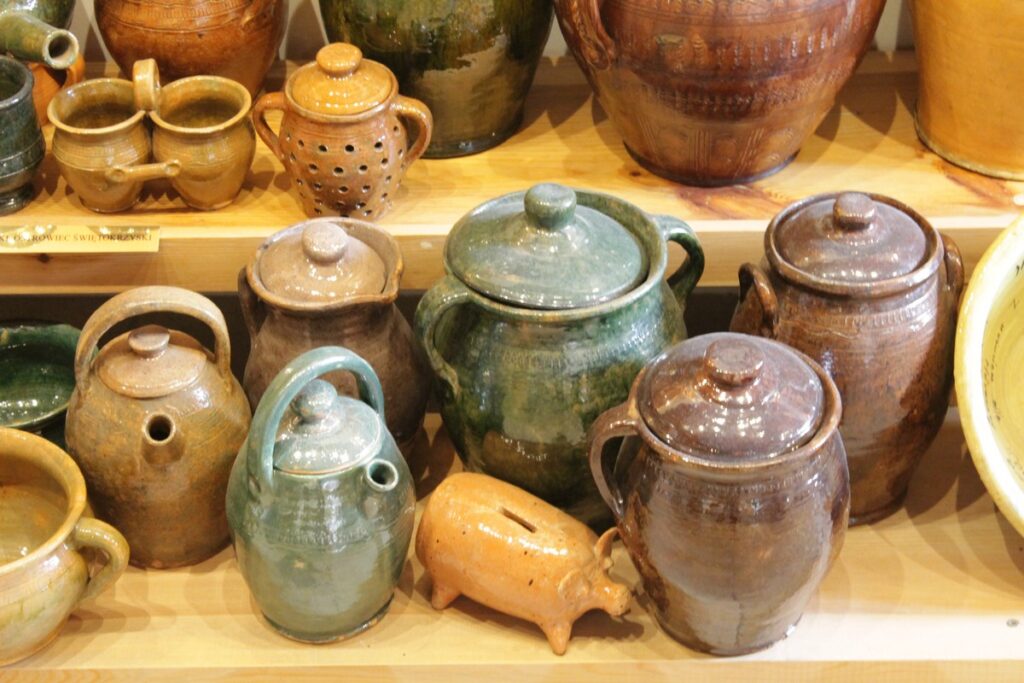 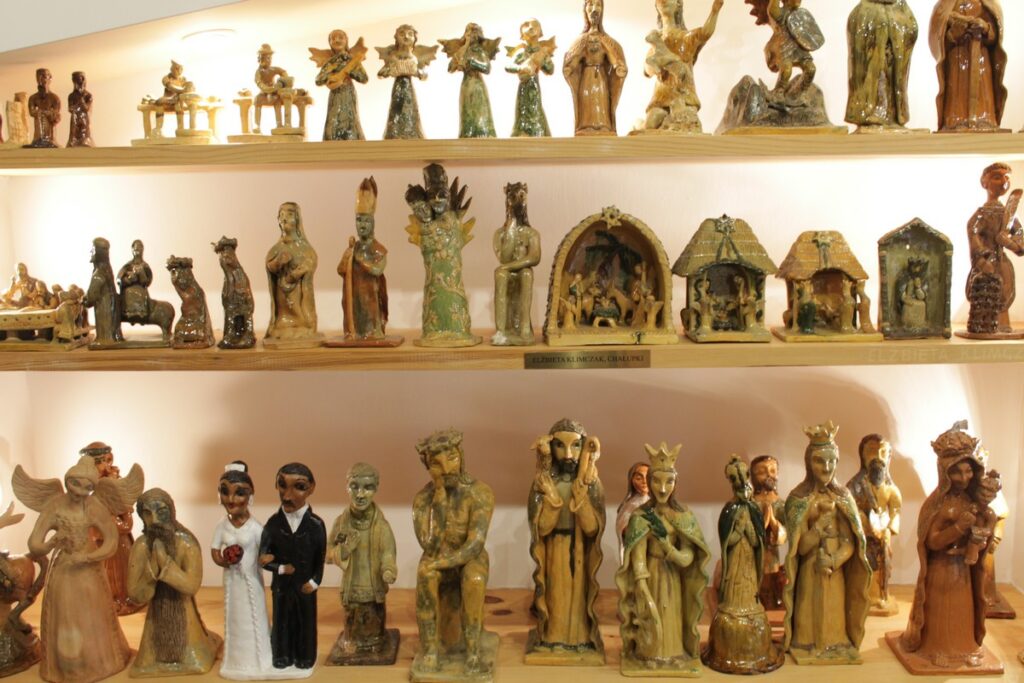 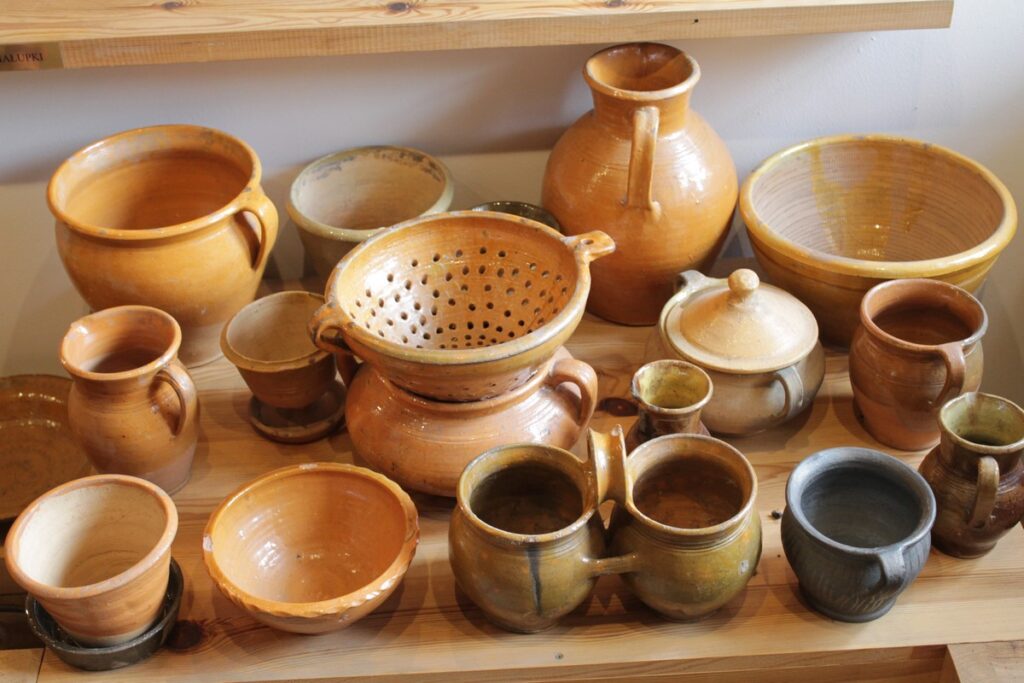 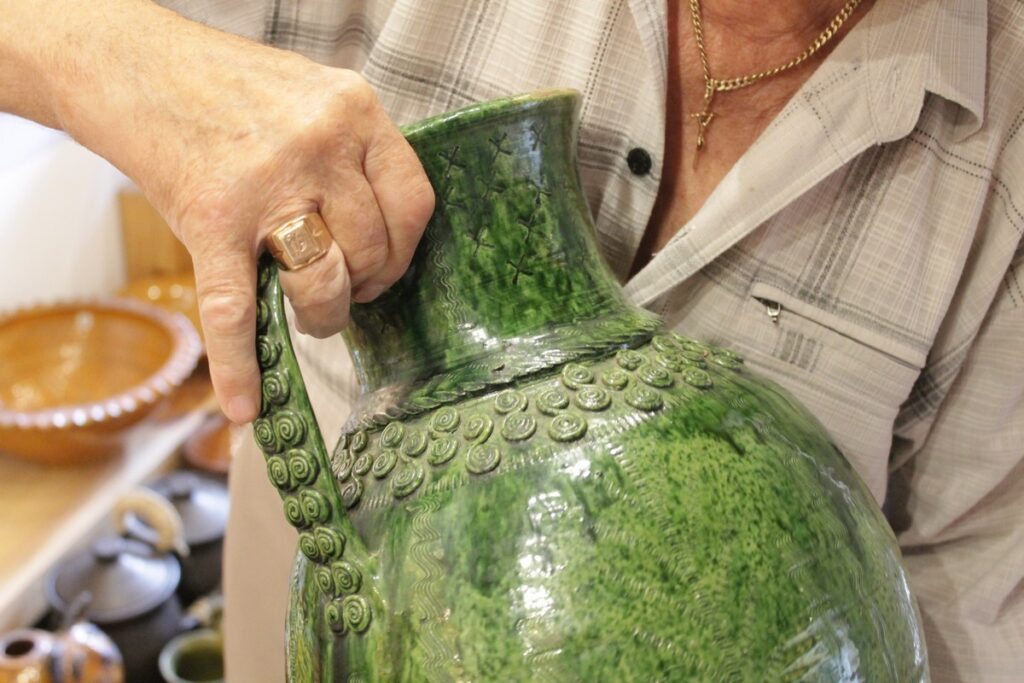 Józef Głuszek, the curator of the center, can talk about pottery with great passion. It comes with great ease because he talks about things that are very dear to him. The workshop we are visiting belonged to his father and grandfather. In the stories he tells, his whole family appears, as well as himself.

As he says, he did not become a potter because his parents wanted him to learn first. They didn’t even let him try it for fear that he would love the activity and quit studying. The potter’s job was very difficult, but despite that, there were several dozen of them in the village. In fact, whole families worked in the profession – both wives and children helped in the studios. Speaking about his mother’s work, Mr. Józef admits that sometimes the work of the potter’s wife was harder than that of her husband. The wife’s occupation was, among others melting lead, creating potions for pouring on pots, and just pouring them and giving them colors. The children, on the other hand, were to create details (e.g. leaves, stems, grapes). 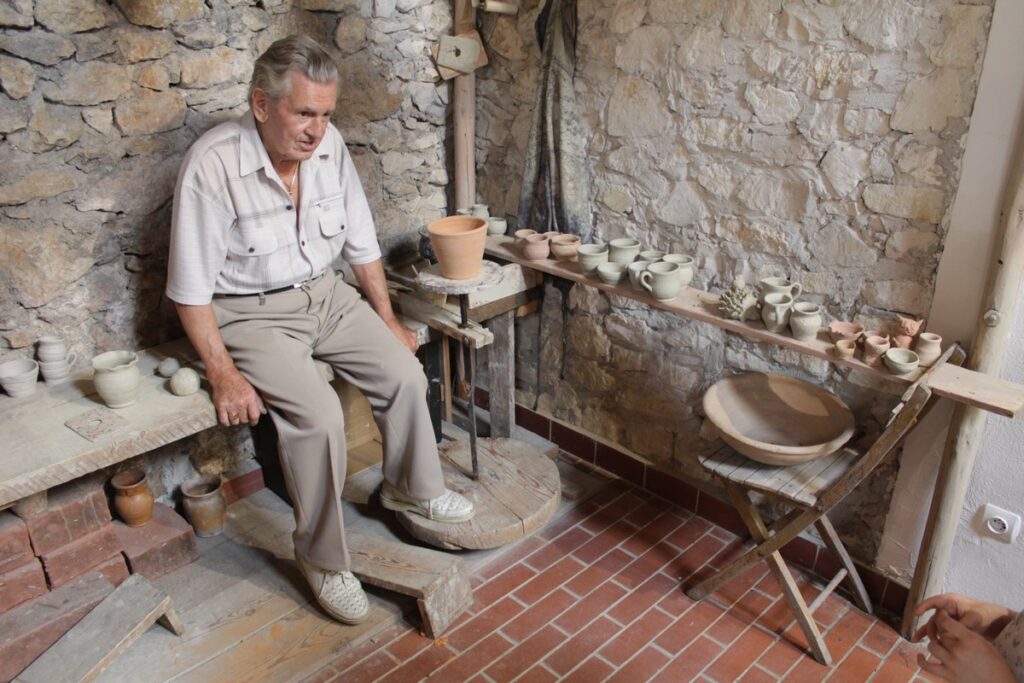 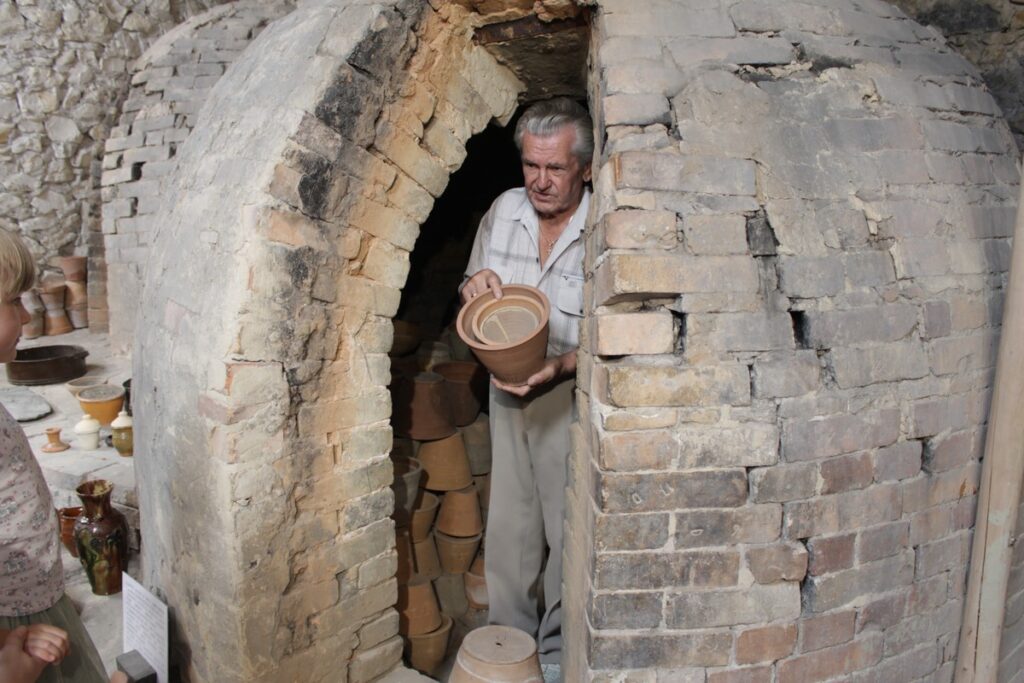 Currently, about 300 people live in Chałupki. The more impressive is the fact that in the heyday of pottery, there were 60 potters in the town. Out of all the workshops in the village, only a few were art studios (producing not only utility items). Pottery traditions in this region probably date back to the 16th century! Crafts were passed down from generation to generation.

The potters used different techniques. According to tradition, if one of them invented a method of decorating the dishes, others in Poland could not use it. The Głuszek brothers were distinguished by snails and multi-colored glazes on the dishes.

The decline of pottery in Chałupki is associated with the large-scale introduction of alternative materials in the production of dishes (metal, plastic) and the lack of continuators in pottery families. Unfortunately, there is no heir of the profession in the Głuszek family – Mr. Józef’s brother learned it from his father, who unfortunately died tragically. 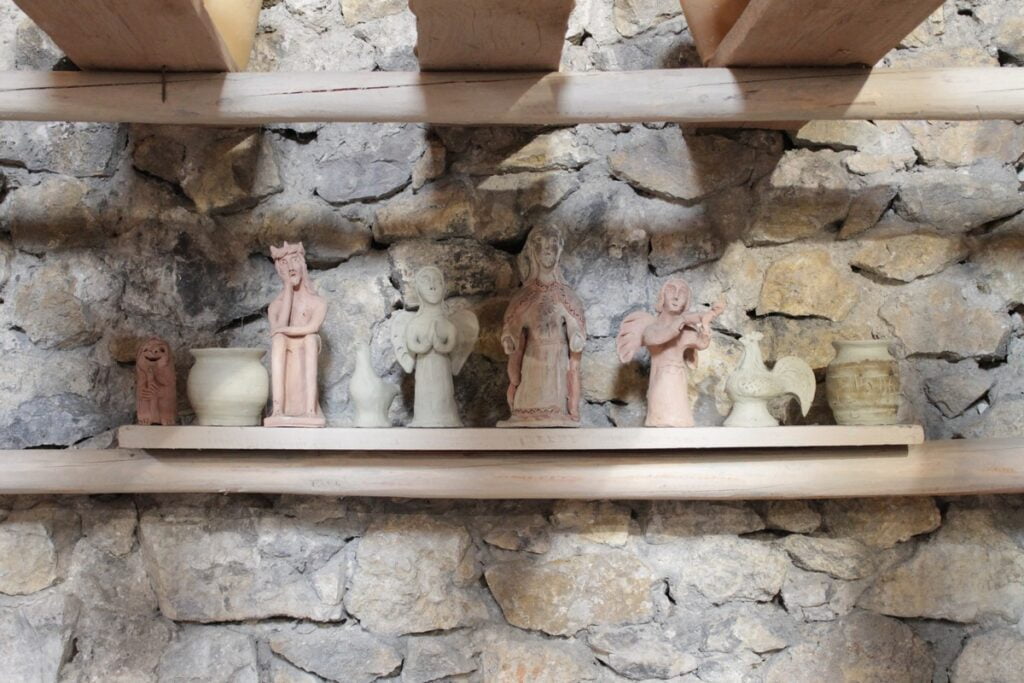 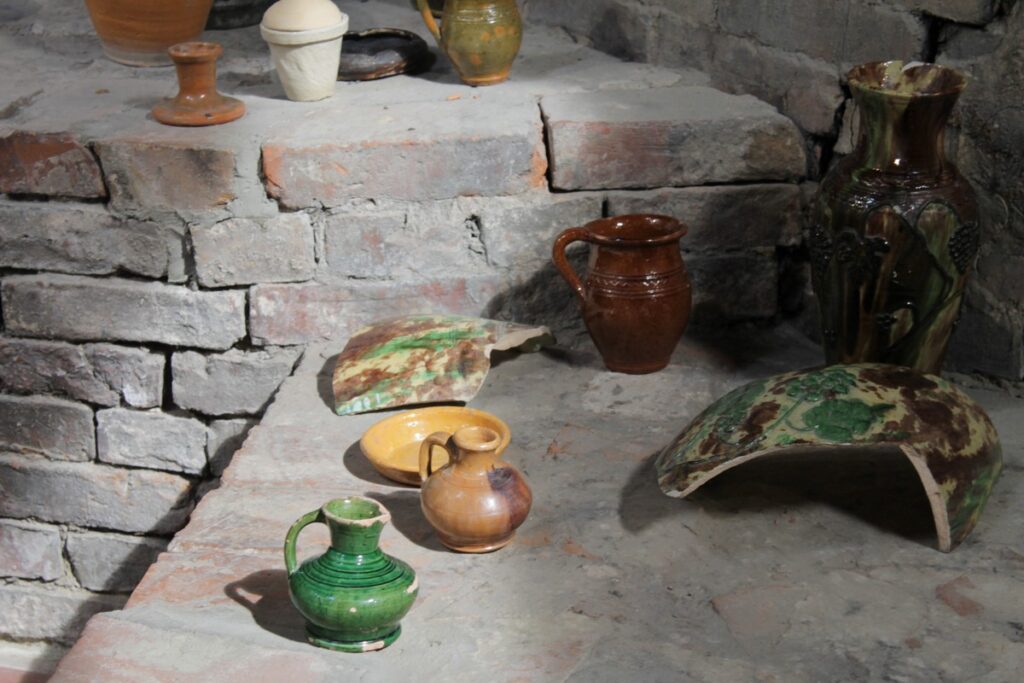 It’s definitely worth to visit Pottery Tradition Center in Chałupki! Mr. Józef talks about pottery with great passion. The story he tells there is still alive, and the Center tries to cultivate it and save it from oblivion. I think he does it successfully.