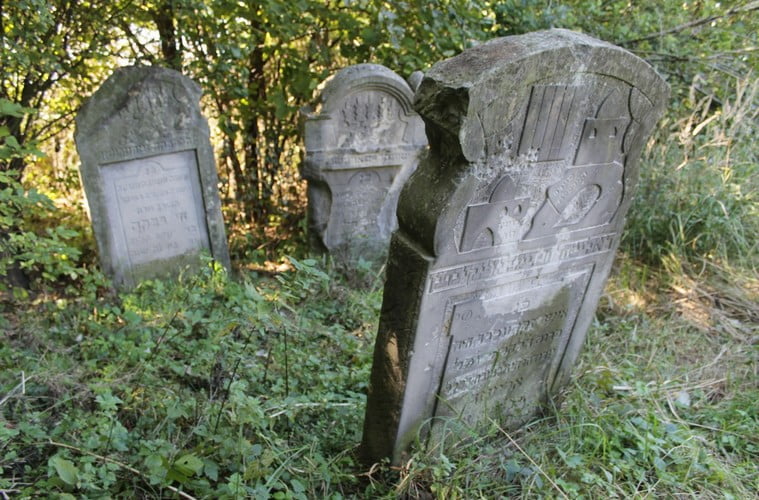 If Bodzentyn is included in your travel plans, there is a chance that your destination is the castle ruins located there. However, it is worth looking at this city a bit wider. One of the places that are definitely worth visiting is the Jewish Cemetery in Bodzentyn, to which I invite you.

The Jewish Cemetery in Bodzentyn is located outside the city centre, practically at the border of the city. Driving from Kielce through Święta Katarzyna, after passing the board informing about entering Bodzentyn, you have to turn right after a while. The cemetery is located in the second line of buildings. Unfortunately, there is no parking next to it, and it is not easy to spot it from the street. The sign with the arrow is turned towards tourists coming from the direction of Bodzentyn.

The de non tolerandis Judaeis privilege was in force in Bodzentyn. It prohibited Jews from purchasing real estate in the city. It was abolished in 1862. The first synagogue in Bodzentyn was probably wooden, but it burned down in 1917. Jews in Bodzentyn ran craft workshops and other businesses (including the first transport line on the Kielce-Suchedniów-Bodzentyn route).

Before the Second World War, Jews constituted about 30% of Bodzentyn’s population. In 1940, a ghetto was established in Bodzentyn, where almost 4,000 people were held. In September 1942, the Jews from Bodzentyn were taken to Suchedniów, from where they were transported in cattle wagons, mainly to the death camp in Treblinka.

It was officially established in 1867, but apparently, burials took place there before. The last burial took place in 1942. Originally, the cemetery had a gate (just like today, the modern one was designed by Marek Cecuła), but it did not have a fence. The matzevot are made of sandstone.

In the 19th century, the Jews of Bodzentyn were supervised by the synagogue in Szydłowiec. Before the local cemetery was established, they made their burials there.

Dorota Herlin-Grudzińska, the mother of the writer Gustaw Herling-Grudziński (actually Gecel Herling), was buried in the cemetery.

Getting to the cemetery is not difficult. You may have a problem with car park. A small staircase leads to the cemetery area. Later, the gate appears in front of us. The cemetery is overgrown, but you will surely notice it. During my last visit, nettles were dominant in the vegetation, but their height did not exceed my knees.

The matzevot are located irregularly, and more than fifty have survived to this day. Most of them are well preserved and have legible inscriptions and clear decorations. They come from the end of the 19th and the beginning of the 20th century.

Bodzentyn itself is an interesting city with a rich history. In addition, you have Saint Catherine (entrance to Łysica Mountain), Nowa Słupia (entrance to Święty Krzyż Mountain) and the Sieradowicki Landscape Park with Wykus at your disposal in the near distance.