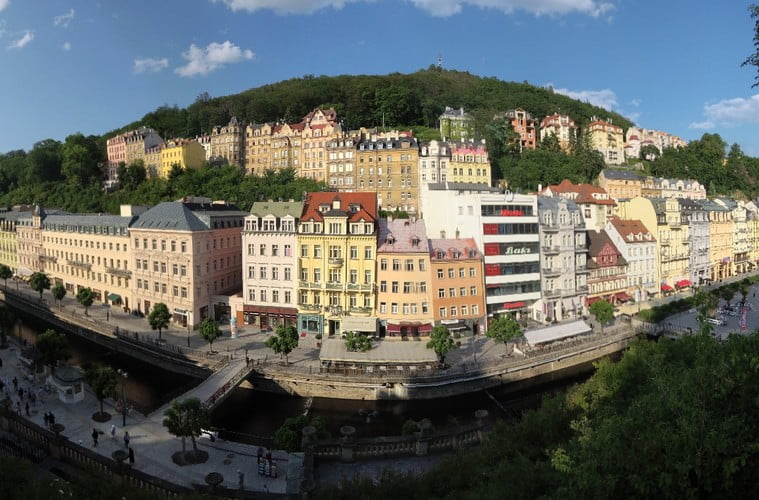 I have heard many times about Karlovy Vary, but I have never visited them before. Fortunately, I finally made up for it and I regret that I did it so late. This is one of the most beautiful Czech spas (located in the so-called spa triangle) has much to offer. Karlovy Vary for the weekend is a great proposition, check it out!

Currently, Karlovy Vary has 15 districts and is inhabited by almost 50,000 residents. A significant part of the city is occupied by mountainous areas. some of the peaks exceed 600 meters above sea level.

The history of the city dates back to 1350 when Charles IV decided to build a city next to a hot spring discovered during the hunt. The settlement was named Teplé lázně near Loket, where his castle was located. Later on, from the name Karol adopted the name Karlovy Vary, which in 1370 received city rights.

In 1522, Doctor Vaclav Payer published the first book about the healing properties of water from Karlovy Vary. Sixty years later (1582), the city suffered a flood, and in 1604 it was completely burned down. The city came back to life and its spa function in the 17th century. The main visitors were the Saxon nobility, Polish and Russian. In 1707, Karlovy Vary gained the status of a royal free city.

Another great fire hit the city in 1759. In 1807, Jan Becher started to produce Becherovka here, and in 1857, the Moser glassworks began its operations. In the meantime, buildings have been erected, which are still standing today – Grand Hotel, Collonades or Theatre.

During World War II, the city was within the borders of the Third Reich. At the end of the war, it was bombed. As a result of the bombing, the stations and part of residential buildings were destroyed. After the war, Germans living in the city were displaced (about 20,000 people).

From 1946, in Karlovy Vary, the International Film Festival takes place, which attracts the greatest stars of the world cinema to this Czech spa.

In Karlovy Vary, there are 79 springs, each of which has a different temperature, and water has slightly different properties. The water temperature varies between 41 and 73 degrees. Some of the springs are included in colonnades, which are five in the city. Water is used to treat diseases related to the digestive system, metabolic disorders, diabetes, movement system, liver problems, but also after oncological problems.

As in every spa associated with the waters, it happens, on every step, we can meet special water jugs. We can choose between many designs, sizes and materials from which they were made.

Treatment with waters from Karlovy Vary is precise and recommended by doctors. We receive recommendations from them which specific springs we should drink. The high mineralization of water can be proved by the fact that the paper rose inserted in them after several days “turns into stone”. Such flowers can be found in some places with souvenirs.

One of the rivers that flow through Karlovy Vary is Tepla (Warm). Its name comes from the fact that one of the hot springs comes to it and the river has a definitely higher temperature for some time. Above the spring there is currently something like a fountain, where water gets outside. The spring is called Vřídlo, and the water that evaporates in the morning makes a nice effect.

Karlovy Vary at various times hosted many famous people. While walking between tenement houses, we often come across memorial boards or information about famous people who used to be in the city. In Karlovy Vary, they visited or lived for example:

If you already visited the most important points of the city, it is worth looking at Karlovy Vary from a different perspective. Near the Grand Hotel, there is a funicular that you can go to the top of Výšina přátelství (556 m above sea level). The funicular was established in 1912 and then it was the longest in the Austro-Hungarian Empire. In the middle of the route, there is a Jeleni Skok stop.

The route is 453 meters long and the inclination angle is impressive. The ticket for the train costs 90 CZK in both directions (45 CZK discounted). At the top there is a restaurant waiting for us, where we can eat something, drink some kofola and something that I like very much in the Czech Republic, that is, a lookout tower, this one is called Diana. It was founded in 1914, and from its top there is a beautiful view of the surrounding area and Karlovy Vary. Admission to the tower is free.

There are several products that are associated with Karlovy Vary. Apart from Becherovka (which was invented here and is still being produced here) and the Mattoni water, which is almost entirely available in the Czech Republic, one of the characteristic products is Karlovar Spa Wafers. The tradition of baking them dates back to 1800. They come with a variety of fillings – chocolate, vanilla, cinnamon and hazelnuts or almonds. They are served both cold and hot. Wafers are about 19 cm in diameter and embossed with a symbol of a goat or a fountain. Karlovy Vary wafers are marked with the Protected Geographical Indication, given to the product in July 2011. My favourite ones are probably cinnamon served hot! 🙂

If Karlovy Vary city is not enough for you, the area around the city also has much to offer. Moser Glasswork (actually located in Karlovy Vary yet) is a place worth visiting. In addition to getting to know the crystal production process, we can also visit the museum located next to the steelworks. You can read more about this place in the text.

If you prefer monuments a bit older, the Loket castle will be a good choice. According to legend, Charles IV set off to hunt and discovered hot springs thanks to visiting in Loket. The castle is preserved in good condition, but the whole town is also really nice. Great for a short trip. Pivovar Svatý Florian located there is another reason to visit.

During my stay, I had the opportunity to live in the Grand Hotel Pupp. The first rooms were built in 1701 (Saský sál). The current appearance of the hotel is the result of the reconstruction completed in 1907. In time, the owners bought neighbouring plots and buildings and adapted them to the hotel complex. After World War II, the hotel was nationalized and was called the Grand Hotel Moscow. In 1989, the hotel was privatized and the original name was restored to him.

The hotel currently has 228 rooms and it has 5 stars. The interiors are stylish and make a huge impression. In the hotel, many films were shot, and among the more famous were Last Holiday (from Queen Latifah) and James Bond – Casino Royale. The list of personalities who slept at the hotel is very long.

The city makes a huge impression. You can see the splendour in the size of houses and their ornaments. However, it has a great charm and walking between the tenement houses we can admire the history of the spa itself as well as stories related to famous people who visited them. If you are in the area, be sure to visit Karlovy Vary for the weekend. The city is also perfect to become the main destination of the trip, so consider it! 🙂