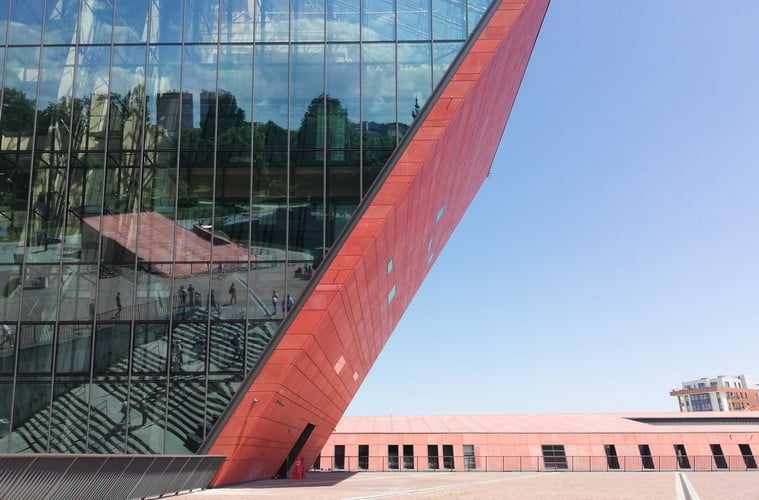 Gdańsk is an interesting and original city. There are a lot of unique proposals on the list of things that you have to see and visit in this place. Today I want to describe to you the place, where you can spend the whole day – Museum of the Second World War.

Plus for the location

A huge advantage of the Museum of the Second World War in Gdańsk is its location (Władysław Bartoszewski Square 1) – walking along the historic center of the city along Motława towards the north, you will reach it in several minutes. The building is very original and characteristic, which definitely makes it easier to reach it. I recommend walking on foot, but calmly, there is also a two-level car park. For those who have a ticket for the exhibition, parking for up to three hours is free, but you must go to the Information Point before you leave.

The main entrance to the Museum of the Second World War is located on level -1. You come inside with huge stairs. The main exhibition is placed on the -3 level. There are also ticket offices, but I strongly recommend buying a ticket via the Internet (normal – PLN 23, discounted – PLN 16). The ticket has a QR code which we scan on the gate leading to the main exhibition. It is true that if we arrive on the spot at the indicated time (the first entry is at 10, and then from 12 o’clock every hour, until 4 pm), we will wait a while in the queue. Unfortunately, the code scanning process is not working – people often need help and a minimum of 5 employees of the museum helps them scan the code with the reader in the right way … it would definitely be faster if these employees just scanned the codes. Maintenance-free gates, which must be supported by several employees, are not a good idea. Sure, there is a chance that if someone comes a second time, he will be able to do it, only what percentage of visitors will come again? … Oh, and one more important thing – they will not let you in! Even with a small backpack carrying the function of a handbag – simply not. With a bit of luck, after putting your backpack back into the locker, the guard or the security guard will let you pass the gate again without queues. As you can see, the museum staff did not make a good impression on us. Fortunately, this amazing exhibition can be visited without noticing its employees.

In the beginning, an exhibition for children

After passing through the gates on the left side there is an entrance to the children’s exhibition “Journey in time. The story of a certain family 1939-1945. ” And this is a good time to consider whether children should attend such exhibitions at all. Probably depends on their age. While visiting the main exhibition, we saw children 4 or 5 years old, watching photos of bodies lying on the street and asking parents what war is. We do not take our child to this type of place. We talk about the war, we show what we can see, but it still has time for drastic facts and photos. Such a special exhibition, directed to children and shown through the eyes of children seems like a good idea, but if someone plans to go with a small child to the museum and watch only this part of the exhibition, I do not recommend it. It is very small compared to the rest – it includes 3 rooms in which the living room in a family’s flat is shown and how it changed as the war events unfolded.

After entering each of the rooms, the first thing we see on the wall is the calendar, thanks to which we know in which moment of the war we have been moved. From the speakers you can hear a child’s voice telling you what’s happening with family at this stage, we’ll find a few children’s toys in the rooms, and unfortunately, it’s all about children. I generally think that the idea is very successful, but not enough in the child’s point of view, and the 3 periods shown in the rooms are definitely not enough. I miss just a greater focus on children, their feelings and living conditions, more details. It is worth to see this place, even without children. When buying a ticket for the main exhibition, the entrance to this part is included.

And finally the main exhibition

When we heard that the tour could take us even 3 hours, we thought that 2-2.5 hours would be the maximum time spent there. If at least you are interested in the subject of WWII, reserve 4-5 hours. Do not make the same mistake as us. The main exhibition is impressive, and in terms of size, and the sound or audiovisual effects used. In many places you can sit and watch short films about the war or those filmed during her. The content value, number of documents,  films and sounds of memories is amazing. If you want to watch, read or listen to everything, you can assume that you will spend the whole day in the Museum of World War II, and you will probably leave with the feeling that you have missed something.

The exhibition is located in a dozen of rooms. Arrows pointing to the direction of sightseeing could be helpful, but I must admit that I usually do not pay attention to them at all. Going through the next rooms, we can at the beginning familiarize ourselves with the general context of political events that led the world to war, and then we go to exhibitions depicting activities during its duration, including exhibitions showing, among others, fight for the survival of ordinary people in various aspects of life in these difficult times. In the halls, you will find both original items from the war, as well as their reproductions, or combat machines – virtually everything that we can expect in such a place. I was surprised by the rooms where the streets or the ruins of bombed buildings were reconstructed – it really makes a huge impression.

Is it worth to vist? – rhetorical question

You should not even wonder if it is worth visiting the Museum of the Second World War – everyone should see this place. Many years of work of specialists preceding the opening of the main exhibition gave an amazing effect. The exhibition in an accessible and very modern way brings us closer to this time of terror, shows the war as it was, without exaggeration and without focusing on one aspect. It shows the image wider, fuller, more accurate, without falling into pathos. There are more shocking and squeezing elements of the exhibition, but the whole exhibition is not overwhelming. Of course, the horror of the war continues to accompany us during the visit, but small elements showing everyday life and the fact that the life of a normal person was still in force, even during military operations, and more importantly, survived, fills with light optimism.

When planning a visit to Gdansk, do not forget to enter the list of the Museum of the Second World War – you really have to see it.