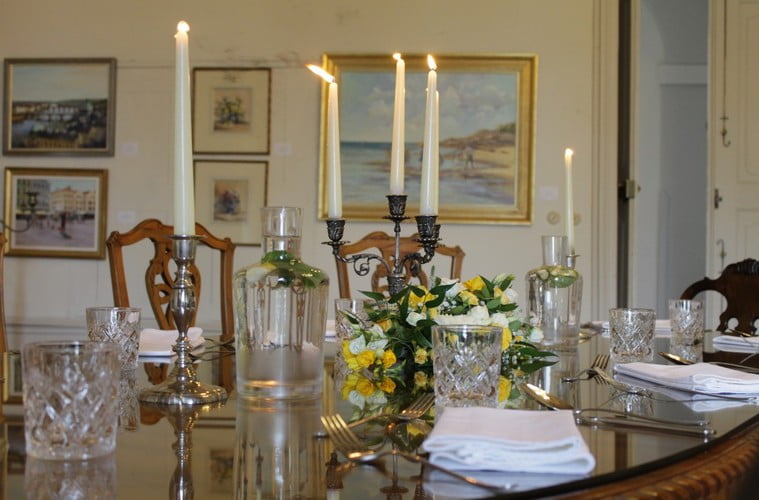 I treat some hotels as a place only for sleeping but a visit to others could be a really nice experience. Chateau Hostacov belongs to the second group and I will tell you why in a moment.

Hostacov, or actually Hostačov (read Hostachev) is a town located just near the border of the region of Vysocina. It is 100 km from Prague, 25 km from Kutna Hora and 60 km from the capital of the region – Jihlava.

The first building in its present location was built in 1297 and it was a defensive structure built on the trade route to Vilemov. In the 16th century, Herman Bohdanec from Hodkov transformed the building into a Renaissance chateau. In 1846, close to the building, a sugar factory was founded by Baron Nepaurer. In 1948, the Chateau was nationalized and transformed into flats for factory workers, and from year to year, its condition was worse. In later years, it was decided that the castle does not matter to the culture or history of the Czech Republic. Another person who was important for the object’s history was Baron Horak. He documented the history of the Chateau and proved its importance. He saved the castle from demolition, but the following years were not easy for the building. In 2007, the castle was bought by the Haša family, and three years later it was opened to the first guests.

16 rooms are available in the entire building. Interesting is the fact that each of them is different. Some have larger bathrooms, some have a massage tub, and some have a separate room to relax – it all depends on the category. One thing connects them – they are stylish and spacious. In addition to refined details and old furniture, I was also attracted by the tea set, which was in my room.

The rooms are divided into four categories – Superior De Luxe (4 rooms), Superior (2 rooms), Classic (7 rooms) and Classic Petite (4 rooms). I slept in a room from the Classic category and I will tell you that if all the classic rooms in hotels look so, I would be very happy.

As far as prices are concerned, for two people at Chateau Hostacov, you have to pay from about 50 to 100 Euro per night with breakfast, which, I think is not an excessive price.

The thing that I immediately found there was the silence that was very pleasant at night. My room just had a window both to the park and the courtyard.

During my stay at Chateau Hostacov, I had the opportunity to take part in the “baroque dinner”. It was a festive meal in a representative room. Musical compositions from the era sound in the background and the dishes were beautifully presented. On the table, there was a broth, duck and fluffy pancakes (vegetarians could eat stuffed peppers instead of duck). The whole enriched with Czech wines was a very pleasant experience.

When it comes to hotel breakfasts, they are compliant with the standards. There is a lot to choose from and you can eat.

Vysocina is a very nice region. There are many interesting places waiting for you in the area. Take a look at the castle Lipnice nad Sazavou, Rostejn or to the cities listed on the UNESCO World List – Telc and Trebic.

There is a chance that you do not know what Disc Golf is, but do not worry, I did not know either! Well, it is a sport, which consists in throwing the disk (similar to frisbe) to the “basket”. Before the start of the game, we get a playing card and start to count throws. Close to each of “baskets”, we have information on how many throws we should put our disk in it. I must admit that the game is really playable and the Hostacov field is the largest in the Czech Republic.

As I mentioned at the beginning, some hotels serve only sleeping, while others have something more. Chateau Hostacov is a place that is very pleasant. Beautiful rooms, peaceful atmosphere combined with an interesting history of the place, disc golf and attractive surroundings make that I recommend this place one hundred per cent.