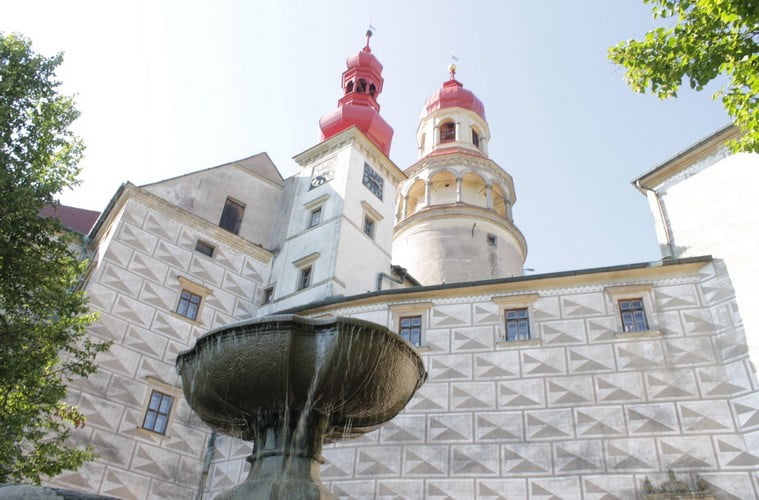 Many people know this city only by sight. It is the first town after crossing the Czech border (from Poland). We pass it often on our way to Prague. However, it is worth stopping in. Today I am going to introduce you the Nachod Castle, which is enough, but not the only reason, for a break on your tour!

The castle is located on the hill in the city of Nachod. It is located a few kilometres from the Polish-Czech border. From the city centre, you can get there on foot (we have a large number of stairs to climb, which are not lighted at night). The parking lot is on the opposite side of the hill (from the city). Nachod is located on the Warsaw-Prague route and is often passed by Polish tourists. Unfortunately, the entire transit goes through the city, so it is often associated with heavy traffic jams.

The castle was built around 1254. In later years, it was rebuilt from the Gothic style to the Renaissance (16th and 17th century). Originally, the castle was supposed to defend the trade route. The story of the buildings was not simple like the most castles. It belonged to Hron from the Naceratic family, King John of Luxembourg, Hynek of Dubaj or Jiri of Podebrada. In 1544, the castle was bought by Zygmunt Smiritz.

In 1623, the Piccolomini family received the castle with the surrounding area. It was a reward for Ottavia Piccolomini for his conspiracy against the life of the emperor (he murdered his competitor – the owner of Nachod – Albrecht of Wallenstein). The family’s ownership in Nachod lasted until 1783.

The next owner of the castle was Petr Biron. Unfortunately, his family fell out of favour after the court conspiracy of 1740 and was exiled to Siberia. After Peter III took the throne, the family returned to favour and bought the Nachod state.

Castle opening hours depend on the season, day of the week and several factors. It would take a long time to write them down here, so I refer you to the website of the castle, where they are written in detail. When it comes to prices, they also vary depending on what we want to see. It’s best to check the current price on the castle website.

In the castle, you can also visit the underground and climb the tower, but this time I was unable to visit them.

If you want to see the view of the city of Nachod and you do not want to climb the tower, then from the city side, behind the walls, there is an observation deck, from where you can enjoy a beautiful panorama of the area, both during the day and at night.

The castle is impressive from the outside, but also hides a lot of pearls inside. Apart from stylish furniture, it is worth paying attention to the tapestries, which are abundant in the castle chambers. They make an impression with the size and compilation of the scenes presented on them. Visiting the rooms you will also find a lot of paintings, a large part of them due to the use of lead in paints is very dark and sometimes even barely legible.

The guiding is in Czech, but we can ask for a script in Polish. A nice thing about Nachod is the rich equipment. Much of the furniture is intact. During the tour, we can visit the representative salons dedicated to the Piccolomini family. You can see them in the pictures hanging on the walls. We can also admire the tapestries brought from Brussels (they were then considered the most valuable and the best). On this level, there is also a Spanish room, which is impressive with its size.

In addition to representative salons, we can also see offices, children’s rooms, bookcases, smoking rooms and many others in Nachod.

The Nachod area is also rich in interesting places. It is worth visiting, for example, the New Town on Metuje. An interesting fact is the nearby Josefov fortress or the Dobrosov fortress group. At a slightly greater distance, we also have the Stone City of Adrspach or attractions on the Polish side (eg Kudowa Zdrój). While in Nachod, it is also worth visiting the local Primator brewery, which wins world awards for its products.

Two brown bears live in the (drained) castle moat. Looking at them it gets sad that they have to be locked up, but they came here from a traveling circus so their retirement is much better than working on the road. Their names are Dasza and Ludwik.

Nachod Castle is impressive. After you climb to the top where the impression is located, it does not pass. It is an impressive structure worth visiting. The body of the castle itself is composing, but the interiors are also interesting. If you are going to Prague or planning to stay in the area, be sure to visit this place!