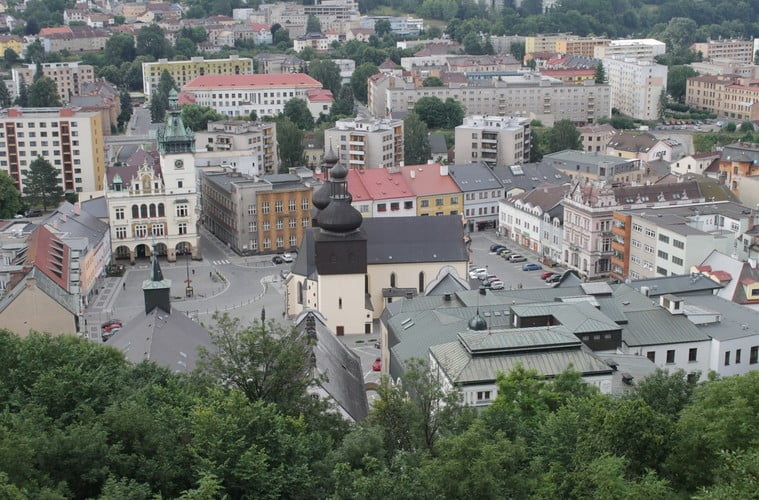 Weekend in Nachod – what to see in the city and around?

Nachod is a city that we pass just across the Polish border on our way to Prague. I had the opportunity to pass through the city several times. The first time I stayed in it for longer. Is weekend in Nachod a good plan?

Nachod is located right on the Polish border (on the route connecting Prague and Warsaw). Most tourists pass by the city from the car windows. However, it is worth stopping for a longer time. Both in Nachod and in the vicinity you will find accommodation without any problems. The city itself is situated at an altitude of 346 meters above sea level on both sides of the Metuji River.

History of the city

Nachod was founded in the first half of the 13th century by the knight Hron. The first records of the city come from 1254. It is said that already in the 11th century a path led to Poland through these regions. Nachod took part in many fights and changed owners many times. Among them, it is worth mentioning Jan Luxemburski, Jan Kold of Žampach and King Jiří of Poděbrady. During the Thirty Years’ War, Nachod comes under the rule of the Italian Piccolomini family. They became famous for the mistreatment of their subjects who rebelled in 1775. Another family that ruled in Nachod were the Curonian people. The city and the castle were revived under their rule. Princess Katarzyna Zahańska (daughter of Prince Piotr) was recognized as a world personality. Her character was transferred to the book by Bożena Nemcova, “Babička”, known in the Czech Republic.

What to see in Nachod?

The square in Náchod is not large, and in its center (which is not often the case in the Czech Republic) there is the Church of St. Lawrence (from 1310). On the square, it is also worth paying attention to the new town hall from 1904, the City Theater and the hotel “U Beranka” (U Baranka). There is also a bench / monument in the square with the figure of the Czech writer Josef Škvorecki. The architecture of the buildings is also worth paying attention to, but more on that in a moment.

The castle towers over Nachod. You can see it from almost anywhere in the city. You can reach it from the Market Square by stairs, but at the back there is also a car park for motorized tourists. Going from the city side up the stairs you will also reach the free observation deck, from which there is a view of the city (it is also beautiful at night, but the stairs are dark, so a flashlight is necessary).

The architecture of Nachod is very diverse. On the one hand, a castle on the hill and a church in the middle of the square, and on the other, art deco, neoclassicism and functionalism (some less, the other more successful). In Nachod we have many examples of architecture from the times of the “First Republic”. It is worth paying attention to the building of the Municipal Libraries (former house of Cyril Barton). While strolling around the city center, you will find a ship-inspired building or a post office building, which may not be beautiful, but certainly original.

We can meet more and more beers from the Primator brewery in Poland. On site, we can visit the brewery and taste its products. We have 16 types of beer and lemonades at our disposal. Sightseeing and tasting takes approximately 2.5 hours. Beers from the Primator brewery (Lager, Weizen and Stout) in previous years gained the so-called Beer Oscar – the title of the best beer in the world in its category.

A very interesting city with an impressive Market Square and a castle. Impressive fully equipped chambers in the building. In the castle garden, it is worth paying attention to the sculptures of Matthias Bernhard Braun and the bridge designed by Jurkowic. While strolling around the city, it is worth taking a look at the “Zadoma” street that runs just behind the houses, from which there is a beautiful view of the surrounding area. There is also an interesting view of the city from the castle tower.

Artillery fortress, part of the fortifications built in 1936-1938. Work is currently underway to make it available to tourists. There will be a complex of underground corridors and defensive buildings located on the surface. There is also a thematic path dedicated to the fortifications of the 1930s.

Josefov is a fortress city. Currently, it is a district of the city of Jaroměř. The construction of the fortress began in 1780. According to the assumptions, 12,000 soldiers were to be stationed in it and be able to defend itself for 5 months. There are over 45 kilometers of corridors under the fortress, and over half a billion bricks were used to build it. Guides dressed in period costumes and a candlelit tour of the underworld add even more atmosphere. More about Josefov in the article.

An interesting place, the fame of which goes much further than Nachod, is the Waffle Cafe. Guests come to visit even from Prague. Why is it worth going there? In addition to many types of cakes, desserts and waffles, you will also find unique coffee there. The owners are passionate about this plant and offer both a blend of coffee and Java Sunda Radiophare coffee from Indonesia. You can try it in various classical formations or, for example, with a drip. The coffee beans come from forest, mountain farms located at an altitude of about 1,200 meters and are harvested by hand.

Nachod is a good starting point, but also has something to offer. It is worth stopping there for a while and visiting the castle or the brewery. You can also easily plan a weekend stay in the city because the area is rich in interesting places.

A few more photos for encouragement!